The Phosphoria Sea was centered in Idaho during the Permian time period, 280 million years ago, and its seafloor rocks extend today from Nevada north through Utah, Idaho, Wyoming, and Montana. Recent studies mapping environments and fossils show that the Phosphoria Sea supported a diverse marine ecosystem including the top predator on the planet, the buzzsaw shark Helicoprion. The Phosphoric Formation is perhaps best known for its rich deposits of phosphate ore that have been mined for over a century in eastern Idaho. However, this formation contains abundant chert deposits that alternate with carbonate and phosphate units. In places, the chert comprises the bulk the Phosphoria Formation. Where are all these cherts coming from?  Early researchers recognized sponge spicules in thin section, suggesting a sponge origin of the silica. But only recently has the source of chert been found in place… and it&#39;s spectacular. Two research groups, working independently, converged on the same finding on opposite sides of the Phosphoria Sea, revealing the Glass Factory. The Glass Factory is analogous to the carbonate factory, a place where large volumes of biogenic silica (rather than carbonate) are produced and later mobilized as the biogenic opaline silica dissolves and reprecipitates to form chert. Preserving meadows of glass-forming sponges is very unusual (unprecedented, perhaps), but they are extensive along the margins of the Phosphoria Sea deposits. These tubular cherts have been described for decades, but misinterpreted as burrows or inorganic concretions, leading us to suspect more Glass Factories are out there to be discovered. 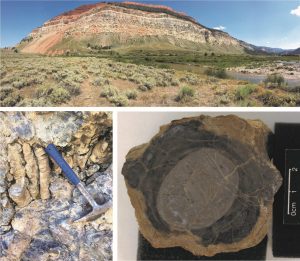